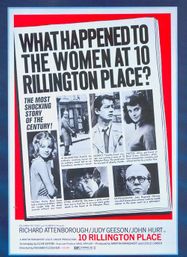 Based on Ludovic Kennedy's investigative book, this is the true and horrifying story of serial killer John Christie, chillingly played by Richard Attenborough. When Timothy Evans (John Hurt) and his wife (Judy Geeson) move into Christie's tiny flat, they do not know that they are now part of the latest plan Christie has hatched to lure yet another woman to her death and pin the blame on Evans, who is soon afterwards hanged. It is only when fate exposes the crimes of the death-house at 10 Rillington Place in London, that Christie is brought to justice and all of England rethinks its views of the death penalty.