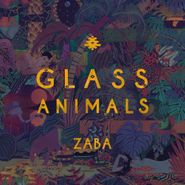 "Indie pop" has just become a ubiquitous term when it's hard to pinpoint a pop sound that explores new territory. Case in point Glass Animals: a band from England that combines poly-rhythmic Afro-rhythms and desert dry synths that are a more radio friendly take on Jon Hassell's Fourth World albums of the early-'80s. Lead singer Dave Bayley conceptualized the band as a solo, lofi project, but brought childhood friends Drew MacFarlane, Edmund Irwin-Singer, and Joe Seaward into this sonic Heart of Darkness. A tropical flavor coats the entire album with syrupy-sweet surprises sneaking up on you. Then psychedelic layers of lucid vocals spin your head through a mystery trip of 21st century exotica. The heavy bass envelops you in a warm womb-like trance that fits the equally freaky and odd lyrics that coo out of Dave Bayley's mouth. "Gooey" is a particularly surreal experience as drippy, melty sounds pour into one ear and float out the other into the atmosphere until it fizzles out into a haunting memory. Zaba is a no mere-morsel of a first album. It's a wondrous smoothie of jazzy, electro mellowness that has more and more rich textures to discover on each play.