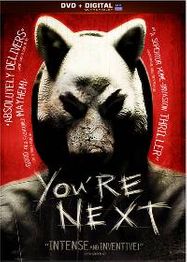 You're Next is a near-perfect little film that plays on two very exhausted genre points and still manages to be fresh and an all-around good time. Most everyone has seen John Hughes' much-loved holiday movie, Home Alone, which, if pondered on, shadows a pretty horrifying concept. Lesser-known but still popular home invasion films include Haneke's Funny Games, Peckinpah's Straw Dogs, and even Them and The Strangers. These latter examples have the unfortunate place card as being “game changers” within the thriller genre and several can hardly be considered horror films due to the lack of an impenetrable bogeyman. Some were also taken a little too seriously at the time of release. A perfect example is Straw Dogs—made and released during wartime when paranoia and sensitivity to violence were exceedingly high. So how, one might ask, can you revitalize the theme? The answer is quite simple; add the ghoulishness of a mask and give tons of nods to both slashers and home invasion films and you've got yourself a refreshing oddball that is actually a parody to all the above.

Following a supposedly agonizing two-year wait for a theatrical release, filmmakers Adam Wingard and Simon Barrett recently attended a Q&A for the film and spoke about said wait, the inspiration behind the plot, and casting choices. The plot, they admit, is not necessarily anything to harp on. A well-to-do family comprised of mom (Barbara Crampton), dad (Rob Moran), three sons and a daughter have agreed—after a supposed estrangement—to gather for mom and dad's anniversary in a recently purchased massive house in the middle of nowhere. Dad's new “retirement project,” as it were.

Each member brings their significant other and each is drastically different in personality. Crispian (AJ Bowden), the heavier set pacifist, brings his spunky but sweet Australian girlfriend Erin (Sharni Vinson). Drake (Joe Swanberg), the resident ass-kisser and would-be yuppie brings the remark-less Kelly (Margaret Laney). Felix (Nicholas Tucci), the mysterious brooder, brings Zee (Wendy Glenn), the mumbling goth, and daddy's princess Aimee (Amy Seimetz) brings the ethnic Tariq (Ti West). Family rifts ensue and drama boils over until someone gets hit between the eyes with an arrow at the dinner table. All hell breaks loose as panic fills the house, plans of survival are poorly executed and the body count rises. Outside the house, using unconventional murder weapons, is a group of men dressed like paratroopers wearing animal masks. The only thing keeping a minority of the house guests alive is a member of the group who, unbeknownst to everyone else, happens to be skilled in fighting back and taking control. The ending reveals a climactic plot twist, etc.

Anyone looking for a traditional and serious slasher movie should look elsewhere. The opening sequence has a direct homage to Scream and within the entire film are various references to other slasher and invasion films for a solely comedic or nostalgic effect. This is not to say that the film in any way resembles the likes of the Scary Movie franchise, but to make it clear that it also in no way resembles the wide array of films that it nods to that have a considerably bleaker tone. While being arguably quite predictable, it is one of the few movies that I've seen in a long time that is just plain fun—regardless of the genre. As the plot unfolds there isn't an impending urge to figure out what some abstract prop or line of dialogue means, nor is there some stomach-churning revelation that makes you relate to one of the characters and therefore get sucked into their experience. Because of this, You're Next is most certainly a flick that audiences either loved or hated.

Still, it is in fact a horror film—full of ultra-violence, screams, scares, a droning theme for the killers and a hyping synth cue for the hero(ine). Aside from the general thrill of these elements, it also features a cast comprised of several filmmakers and film enthusiasts who provided heavily improvised dialogue—giving it an almost independent feel despite its high production value. Its also worth mentioning that Sharni Vinson (Step Up 3D) shines in the film in a most unexpected way that is a plus for anyone who enjoys seeing strong female leads and women who aren't necessarily sexualized and dumbed down for horror rolls. For those familiar with Wingard's work, You're Next, he explained, was an attempt at something different and fun following V/H/S and A Horrible Way to Die, which also features several of the same cast members. In short, less mumblecore and more senseless gore. I recommend it to those who are underwhelmed by direct parodies but can appreciate a well-made and oft-hilarious revision of one of the most classic and unsettling themes in existence.

Aubrey and Paul Davison decide to celebrate their wedding anniversary by inviting their four children and their significant others to a family reunion at their remote and slightly rundown weekend estate. But the family reunion goes awry when their home comes under siege by a mask-wearing team of crossbow-bearing assailants. The family has no idea who's attacking them, why they're under attack, or if the attackers are inside or outside the cavernous, creaking house. All they know for certain is that nobody is safe.