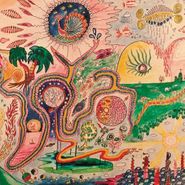 This is the album that finally allows you to completely crawl into your headphones and disappear into that druggy candyland you’ve always yearned for… Pure pop that’s all morphed and gurgling and slippery from the sheer backstock of cosmic emanations that have been building since 1969.

Youth Lagoon aka Trevor Powers at only 22 was the precocious new kid on the indie block with 2011’s The Year of Hibernation. Though a strong debut, the album could get a bit precious as one would expect when listening to a 22-year-old’s debut indie pop album. But if The Year of Hibernation was sugary, Bughouse is coated with codeine syrup. It’s a woozy collection of psychedelic pop, as eccentric as it is rousing. “Mute” sprawls with epic grandeur in its first minute before breaking down into spiraling sounds of broken-down toys and keyboards.

Powers’ vocals climb to the top of his manic creation, which gradually becomes a psych rocker with a gorgeous guitar solo. “Attic Door” is prime Syd Barrett in Wonderland weirdo psychedelia, while “Pelican Man” takes a similar notion to Sgt. Pepper’s-style pop heights. As Wondrous Bughouse progresses, it seems to grow more assured, as mid-album cut “Dropla” makes for the album’s catchiest moment — an eyes-wide-open pop song in the vein of Mercury Rev and Flaming Lips’ finest, built on the naïve, repeated couplet “you’ll never die.” True to its Strawberry Alarm Clock title, “Raspberry Cane” is a beautiful slice of acidic sunshine pop that moves from esoteric to a crowd-pleasing refrain that marks Powers’ most classic pop moment to date. It’s a wondrous thing to hear, indeed.