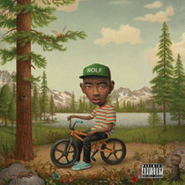 Tyler, The Creator has always been an artist and persona as divisive as he is undeniably talented, so why expect (or want) that to change? Sprawling tracklist, angry, occasionally homophobic lyrics and all, Goblin was affecting in its ugliness. The Wolf builds on the Odd Future kingpin’s sound with more manageable beats and R&B touches, but he’s the same troubled joker at heart. The Wolf’s opening title track is a slowed-down, reverbed-out R&B track not totally unlike something Frank Ocean or How to Dress Well might produce, provided they told everyone and everything to fuck off for the entirety of the song. “Jamba” finds Tyler teaming with Hodgy Beats for a good ol’ fashioned angsty, nasty Tyler track as he raps about cussing out Siri and Hodgy Beats raps about getting his scrotum on the news, saying “you can drink piss and eat a dick in a few.” However, Tyler has a knack for slipping in heartbreaking detail into his songs (“brain cancer ate my granny up” he says with razor precision near the opening of the deep, dark “Cowboy”). It may not hit with the same menace as previous single “Yonkers,” but Wolf’s “Domo23” gives Tyler the chance to display his wit (and ability to manipulate his audience), taking haters and admirers to task, rapping “came to Pitchfork with a couple Jada pickett signs and said I was a racist homophobic, so I grabbed Lucas and filmed us kissing” in a jumpy cadence that drops the machismo. It’s a brave move, given hip-hop’s glacial pace on the subject, though it doesn’t quite explain the frequent f-bombs, especially given cohort Frank Ocean’s coming out; he gets more sympathy from the funny tirade against the father he never met, “Answer.” Musically, The Wolf gets funkier the further it goes, on tracks like the lush, dirgey medley “Partyisntover/Campire,” featuring Stereolab’s Laetitia Sadier, combined with “Bimmer” featuring Ocean, in a seeming bid to rival Ocean’s epic “Pyramids” that intrigues for its strangeness, even if it doesn’t fully come together. Tyler’s angry love song “IFFY” (“I fuckin’ hate you”) gets props for having the worst way to tell someone you like them (“The sky is fallin’, bitch let’s try to catch it”), with Pharell’s soothing presence confounding Tyler’s threats of strangulation. Overall, The Wolf is slightly bloated with a few too many experiments and random guest spots that don’t work; when it does, you’re thankful for Tyler’s abrasive presence in the hip-hop world. For instance, “Trashwang” starts with forty seconds of gunshots and screams that continue to interrupt the proceedings and undercut an otherwise seemingly straightforward hip-hop crew track, with Tyler declaring “I want the black kids to like me for this one.” That loaded statement speaks to part of what makes Tyler both divisive and special. His refusal to capitulate to norms of any kind, societal or hip-hop, are a large part of his appeal. You might not celebrate everything Tyler says or attempts musically on The Wolf, but he never feels less than brutally honest and enormously expressive.