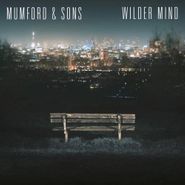 Recreating yourself isn’t easy when you’re one of the biggest bands on the planet. But Wilder Mind sees Mumford & Sons successfully shift from “Civil War”-style folk rock to a more wide-reaching rock sound boosted by synthesizers and light orchestration. It’s a similar feat that Kings of Leon pulled when it added ’80s guitars to its Southern Rock or how Killers looked to Springsteen for inspiration. Songs like “Tomkins Square Park” and the title track offer spacious grooves for Marcus Mumford’s never-better vocals to emote over, while “The Wolf” goes full throttle with huge, crunching guitars. Touches of synthesizer wriggle their way into songs like “Snake Eyes,” which moves from a spare, heartfelt opening into a swift gallop. Mumford’s voice sounds wearier (and better) than it did on 2012’s Babel, which suits his lovelorn lyrics well, and he’s learned how to rein it in for maximum impact on tracks like the anthemic “Believe,” giving Bon Iver a run for his money. Not all Mumford & Sons fans will like the changes the band have made, but in doing so, Mumford & Sons have proved themselves to be a better, more interesting band than their detractors have given them credit for, risking it all for a more layered, produced sound when they really didn’t have to. For those who miss the old style, the album’s second half offers folksier tunes like the lovely “Cold Arms.” With Wilder Mind, Mumford & Sons have gotten wilder indeed, and they’re all the better for it.