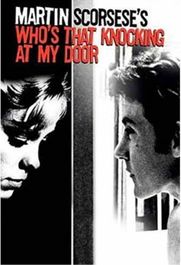 "A broad. You know, there are girls, and then there are broads. A broad isn't exactly a virgin, you know what I mean? You play around with them...You don't marry a broad..." -- Who's That Knocking At My Door

Who’s That Knocking At My Door, directed and co-written by Martin Scorsese, has had various names, influences, and spans of time in which it was filmed. One thing that leaves no question is that for Scorsese and Harvey Keitel’s first feature-film, it is an ambitious and carefully executed debut that will leave you wanting more. Keitel plays J.R., an average Italian-American whose idea of a good time is romping around with his friends and persuing “broads.” All that changes when he meets a beautiful and traditional girl (Zina Bethune) whose purity is so alluring that he cannot help but get involved. His Catholic classification of women to be the “Madonna or the whore” ignites an inspiration not only to be a gentleman, but also to offer up a willingness to settle for such a girl. But when a secret from her past distorts the fine lines he thought every woman could be defined by, J.R. must confront and break down everything he once understood about affection and his convictions.

These ideas of Catholic guilt are often in Scorsese’s films and can be seen from as early as Mean Streets to as recent as The Departed. His use of fitting and excellent pop songs has also become the norm. The Doors, Searchers, Bell Notes, and Junior Walker & The All-Stars all set the vibe for this urban romance and rowdy behavior.

Scorsese incorporated, as in later films, excellent cameos, including himself and his mother Catherine, during the opening scene. The cinematography is hands down one of the most impressive things about the film. It being shot in black and white adds its own beauty, but influences from earlier films lead him to choose a person skilled enough to add the grace of those films and still compliment his film's abrasive content. Ultimately it resonates with a classic feel, which is fitting for a director whose work would later be seen as such.

Regardless of your interest in seeing films centered around the average, to not so average, lives of certain peoples, this film evokes an inspiration that shouldn’t be looked over. His ability and drive to document the lives and dialogue of Italian-Americans in this film, and others, is wonderful. Rarely can you come away from a debut work with not only an anticipation for works yet to come, but also with an admiration of its confidence. If you’ve yet to experience this in cinema, watch Who’s That Knocking At My Door and see how it’s done.

For the movie world, a major talent was knocking: New York University graduate film student Martin Scorsese. Roger Ebert of the Chicago Sun-Times proclaimed Who's That Knocking At My Door to be "a great moment in American movies." Harvey Keitel plays J.R., an unemployed youth content to hang out with his buddies in New York's Little Italy. But love, in the person of a college-educated girl (Zina Bethune), soon throws J.R. into a turmoil that challenges his ways of looking at the neighborhood - and life itself. Scorsese went on to make such landmark films as Mean Streets, Taxi Driver, Raging Bull and GoodFellas. Each shows he's lost none of the fire and inventiveness seen here in his debut work.