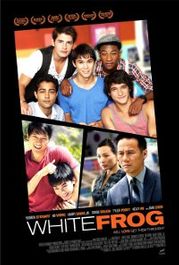 After the death of his popular brother Chaz (Harry Shum, Jr., Glee ), Nick (Booboo Stewart, The Twilight Series), who suffers from Asperger's syndrome, struggles to carry on. Nick's parents (played by Joan Chen and BD Wong) have their own problems coping with the loss, but Chaz's best friend Randy (Gregg Sulkin, Wizards Of Waverly Place) takes Nick under his wing. As Chaz's family comes to understand his secret life, they will be forced to reconcile the boy they thought they knew with the man he really was. White Frog is a universal story of the power of family, friendship and love positioned to appeal to a broad audience in the same way as Ordinary People and Stand By Me.