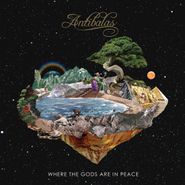 Antibalas is like all the best artists on Daptone Records: though the music is dated in a way, it never rips off other artists and instead riffs on directions set in place by greats like Fela Kuti or James Brown. It captures the vitality and energy of Afrobeat and funk instrumentals, but never feels like a nostalgia act as they perfectly balance the sounds of yesterday with enough modern zing to spice it up. Just listening to the beginning of their new album, Where The Gods Are In Peace, the steady rhythm sends waves to your ears and into your brain that will get your heart pumping to the beat. Like all large ensembles, Antibalas has seen their musicians split ways from the group to join up with acts as diverse as Arcade Fire and Mark Ronson, but the new blood in the band has turned their latest album into a fascinating experiment. Instead of an album of independently great songs placed in a thoughtful order, their latest is a three-part suite that is also a cosmic-minded concept album about aliens, ancient history, and humans' placement on Earth. The powerhouse opening track, "Gold Rush," is a heavy 11-minute (wow!) jam of fuzzy guitars and vocals reminiscent of Africa 70 that will send you into a trance. When the drums really kick in, you'll become hypnotized by the unreal catchiness of the beat that heads into one of the best trombone solos your ears have heard in a long time. The relatively mellower "Hook & Crook" feels stonier and more experimental with a free form sax freakout in the middle of the song. It doesn't have the fiery anger that the opener has, but it feels like a perfect needle drop to play in the middle of a party or DJ set. In a world that feels increasingly chaotic and out of control, there's something about the unbridled fun and sincerity of Antibalas that makes this album sound more necessary than ever. It achieves catharsis for its listeners through blaring horns, forceful vocals, and rhythms that will be spinning in your head for weeks.