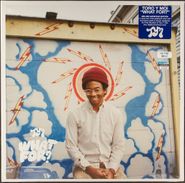 Whereas Toro y Moi’s last album, Anything in Return, doubled-down on Chaz Bundick’s ’80s synth-funk influence, What For? goes the other route, delving deeper into the psych-soul that informed his excellent second album, Underneath the Pine. What For? somehow feels focused, even while swinging from Beatlesesque pop (“What You Want”) to A.M. radio soul (“Buffalo”) and ornate Zombies-style psychedelia (“The Fight”). Fans of Toro y Moi’s chillwave past might find What For?’s paisley environs take some getting used to, but Bundick’s records have never hued too closely to one genre in particular. Even when he’s taking on ’90s-style indie rock on “Empty Nesters,” he has a way of tying everything together, throwing in “Boogie Nights” asides that make the whole thing feel like a Saturday morning cartoon theme song played by Stephen Malkmus & The Sunshine Band. Given Bundick’s penchant for reinvention, this is likely just another stop in his evolution, but his foray into bleary psych-funk pastiche is inviting enough to sit down and stay a while with What For?