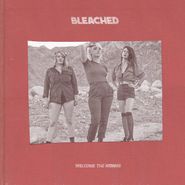 
Bleached features sisters Jessie and Jennifer Clavin at the helm, formerly of punk greats Mika Miko. Their first album, Ride Your Heart, was a blast of fuzzed-out riffs and sugary, snarling melodies. This time around, they've teamed with engineer Joe Chiccarelli (Morrissey, The Strokes, Elton John) and co-producer Carlos de la Garza (Paramore, YACHT) and added bassist Micayla Grace to the fold, resulting in an album that’s bigger and fuller but no less charming. Ended relationships, home eviction and other twentysomething turmoil fuels the determined energy of Go-Go’s-esque punk rockers songs like “Keep On Keepin’ On,” while L.A. imagery remains a focal point of inspiration. “Trying to Lose Myself” is a hedonistic trip, all about how great and shitty it is all at once to get high all the time and sleep around, while the guitars are appropriately LOUD. Thankfully, Chiccarelli and de la Garza haven’t sanded away the Clavins’ rough edges, but merely helped to present them well — witness how the ferocious power-pop of “Wednesday Night Melody” crashes into a chorus of crystalline, Bangles-esque harmonies. And the Clavins’ pop side comes out roaring on the last half of the album, which boasts a wealth of hooks on songs like the new wavey “Chemical Air” or fizzy “Sour Candy,” the latter of which could be reimagined for a Carly Rae Jepsen or Sky Ferreira album. Welcome the Worms is a bag of candy-covered razorblades that never fails to entertain.