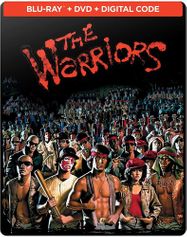 From Director Walter Hill comes a battle of gigantic proportions looming in the neon underground of New York City. The armies of the night number 100,000; they outnumber the police 5 to 1; and tonight they're after the Warriors - a street gang blamed unfairly for a rival gang leader's death. Members of the Warriors fight for their lives, seek to survive in the urban jungle and learn the meaning of loyalty.