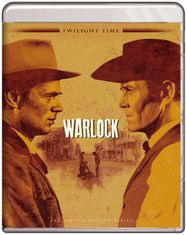 Warlock (1959) is a remarkable adult Western directed by Edward Dmytryk, starring Henry Fonda as a murderous gunslinger hired to rid a frontier town of a gang of troublemakers. Meanwhile, a onetime black hat, played by Richard Widmark, takes on the more formal job of sheriff, and finds himself dealing with both the cowboy gang and the gunslinger. Anthony Quinn and Dorothy Malone co-star, backed by a villainous crew of superlative character actors. Shot by the great Joe MacDonald (My Darling Clementine), and featuring a score from Leigh Harline.