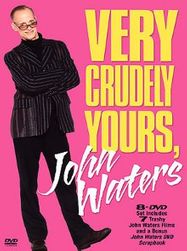 Pink  Flamingos - This landmark cult classic sets a benchmark for the bizarre that has never been equaled. Divine stars as Babs Johnson, "The Filthiest Person Alive." When fellow degenerate Mink Stole coverts her title, down and dirty competition ensues. Don't miss the infamous dog walking scene, or the fabulous Edith Massey starring as "The Egg Lady."

Female Trouble - Divine stars as mean teen Dawn Davenport, who turns to a life of crime when her parents fail to give her the cha-cha heels she wants for Christmas. With her illegitimate daughter (Mink Stole) and delinquent girlfriends beside her, she becomes a bizarre canvas for the fascist Lipstick Beauty Salon owners (David Lochary, Mary Vivian Pearce). A media star obsessed with the idea that "crime is beauty," her story comes to a shocking conclusion!

Desperate Living -Things get rocky at the Gravel household, when paranoid Peggy Gravel (Mink Stole) and her murderous maid Grizelda (Jean Hill) kill Peggy's husband. They escape from the law, only to wind up in the crazy town of Mortville, where Queen Carlotta (Edith Massey) presides over a sleazy collection of misfits, including the vivacious Muffy St. Jacques (Liz Renay). When the Queen disinherits her daughter, Princess Co-Co (Mary Vivian Pearce), the citizens of Mortville decide that it's time for a few changes!

Polyester - Meet Francine Fishpaw (Divine), tortured suburban housewife. With a pornographer husband, a pregnant teenage daughter, and a son with a foot-stomping fetish, Francine smells trouble around every corner. That is, until she meets and falls madly in love with Todd Tomorrow (Tab Hunter). Also starring Edith Massey as Cuddles, Francine's best friend, and **Mink Stole as the husband's mistress.

Pecker - Pecker, a Baltimore teenager who picks up a second-hand camera and starts snapping his way to stardom. Discovered by a savvy New York art dealer, Pecker's photographs, which highlight his obsessive girlfriend and her fascist laudromat, his sister and her raunchy all-male strip bar and his other "culturally challenged" family members and friends, make him a nationwide sensation. But Pecker soon discovers that instant over-exposure has its downside and he must make a fateful choice between his life and his art.

A Dirty Shame - After an accidental concussion awakens the carnal urges of convenience store owner Sylvia Stickles (Tracey Ullman), the people of Baltimore become pitted against each other in an epic battle of decency vs. depravity. Sylvia meets Ray-Ray Perkins (Johnny Knoxville), a tow-truck driver and secret sexual healer, and together they lead her devoted husband , Vaughn (Chris Isaak), and her go-go dancing daughter, Caprice (Selma Blair), down a whole new road to sexual satisfaction.