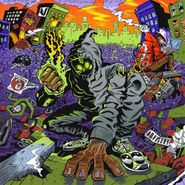 In many ways, Unlocked is a victory lap for South Florida rapper Denzel Curry. Following last year’s wildly acclaimed ZUU, Curry teams up with rapidly ascending producer Kenny Beats for a brief EP. While most victory lap releases tend to give more of the same -- the idea that “this is what you all loved the first time” -- Unlocked follows a different trajectory. Extremely stylized within the technoshock aesthetics that dominated turn-of-the-millennium NYC rap, from EL-P to Nonphixion, as well as production techniques borrowed from RZA’s bag of tricks, Unlocked seems to exist as a freewheeling excuse to creatively, playfully pay homage to hip-hop’s past. The production by Kenny Beats is not the only callback here, as a track like “DIET_” finds Curry approximating DMX’s signature bark for the hell of it. Yet the result is nowhere near some bland retroism, as you can tell that Curry or Beats don’t seem particularly keen on truly wishing they were back in “the good ‘ol days” of hip hop. Rather, this is a clever juxtaposition of vintage sounds right alongside the multifaceted complexion of modern hip-hop. Just listen to the dense sonic collages that constitutes“Track07” and “’Cosmic’.m4a.” Don’t be fooled by the length of Unlocked: the ideas are overflowing, even if the running time is not.