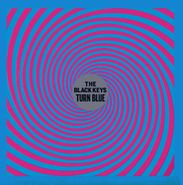 More of the same from Dan and Patrick, but we’re always guaranteed a good time. Danger Mouse adds just the right stuff (again) to make this the perfect album for a long road trip or other activities…

Blues-rock revivalists and general global music superstars/impresarios/tastemakers return with album eight of greasy, slinky, blues oriented boogie rock. On Turn Blue, guitarist and vocalist Dan Auerbach has made a shift into darker and more melancholy material, tying the band's trademark boogie to a lonesome and soulful shuffle, fomented by the singer's recent divorce. The album is co-produced by jack-of-all-sounds Danger Mouse, who imbues the record with a sheen caught somewhere between dancefloor and honky-tonk, a site the Keys reside upon comfortably and elegantly. Turn Blue is a decidedly mature record from one of the most ambitious acts in rock music today, it has the potential to please old fans with its refinement-without-compromising-pummel vibes, and the ability to invite new fans to join the fold, offering a unique take on blue-eyes soul-boogie that many contemporary rock fans are still having trouble finding.