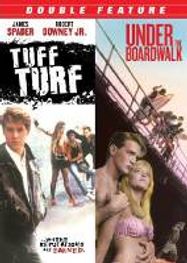 Like a stunned archaeologist I happened upon a relic from the past that may be a Holy Grail for shining light on an era and a people; it’s a little movie called Tuff Turf. Perhaps it can be used not to tell us about life in 1985 — I imagine that any relation to actual life is purely coincidental — no, it tells us more about the hack filmmakers of that period. Like so many films about young people in that period, the filmmakers are highly influenced by the worst qualities of music videos and seem intent on filling the movie with banal musical interludes. It’s a mix of Class of 1984 and Footloose (which obviously includes some Rebel without a Cause), mixing in live performances but without the skill of Streets of Fire. Yes, it’s supposed to be a gritty school gang vs. the new guy flick, but where flicks like Class of 1984 and even Bad Boys were legitimately disturbing, even with some heavy moments of violence Tuff Turf carries the influential stamp of Grease 2, or worse, ‘60s beach movies. There’s actually a shocking moment when the kids break out in a spontaneous, highly choreographed dance number (no, really); any state of edge in the film is an accident. Oh, and the editing and timing are completely stilted and awkward. However, these minor grievances aside, Tuff Turf is a bad film; as a matter of fact its severe mediocrity actually makes it all the more fascinating and entertaining.

Understanding what motivates the lead character Morgan Hiller is a challenge for viewers because he’s played by a young James Spader, who even in his best performance (Sex, Lies, and Videotape) can come off as aloof and odd, as if he’s Christopher Walken’s prettier younger brother. After a long music video credit sequence, the film opens with a group of Los Angeles Valley teen toughs straight out of Michael Jackson’s “Beat It” video, mugging a civilian. The hair-sprayed bandanna gang is led by big-chested Nick (thirty-something looking Paul Mones) and his devoted main squeeze, Frankie (child star later turned reality TV mess, Kim Richards). Morgan rides his bike, whistling past the gang spray painting their faces and ruining their crime. Is he some kind of teen vigilante? Nope, just an East Coast rich kid who relocated to L.A. after his family fortune went bust. Now this former prep school rebel has to figure out how to fit in at a rough public school; it didn’t help to make enemies with Nick and his crew. Even after they publicly mess up his bicycle the nearly fearless Morgan continues to woo the much more “street” Frankie, pushing Nick’s wrath even further.

Aided by his only new school bud, a New Waving drummer named Jimmy (a pre-Weird Science Robert Downey before adding the “Jr.” to his name in credits), Morgan plays by his own book, even wearing dark sunglasses into the Principal’s office! He and Jimmy fearlessly steal Nick’s car and with Frankie and her even trashier gal pal sneak into a posh country club, making fun of the snobs. Morgan even breaks into a touching song, but unlike Hair, this isn’t supposed to be a musical, which is one of the strangest things about Tuff Turf: the music and music numbers. Besides the love song and big dance numbers there are long, strange musical performances from a horrible act called Jack Mack and The Heart Attack whose rendition of “Green Onions” sets the punk kids agog. The soundtrack is also filled with songs from The Jim Carroll Band, including the movie soundtrack staple "People Who Died." In a seeming unending scene, the very David Bowie-looking Jim Carroll performs onstage, perhaps again of interest to cultural completists but unbearable for a layman to sit through. (Of course, Carroll would go on to pen the culty autobiographical book The Basketball Diaries before his death at the age of 60 in 2009). The film ends with the inevitable showdown between Morgan and the creeps, and when you think his goose is cooked, out of nowhere Downey shows up with some attack dogs (strange since any earlier scenes where his dogs may of been introduced to the plot never happened). Cutting room floor? Maybe just a classic deus ex machina).

Tuff Turf was director Fritz Kiersch’s follow-up to Children of the Corn and though he continued to put his visions on film for another two decades, it was probably his last film to make it into a movie theater, or even make the transfer from VHS to DVD (though he did do a fantasy flick called Gor with Jack Palance that looks positively fascinating). By the mid ‘80s on-screen teen rebellion was moving from the violent grit of films like Over the Edge and Rumble Fish to the cutsy pie smugness of John Hughes’s Ferris Bueller and The Breakfast Club. Tuff Turf tries to split the difference and have it both ways. But more than any of its peers, it may have a more whacked out ‘80s vision of what’s hip and cool; in some ways it’s closer in spirit to the ultimate ode to the Reagan decade, a little-seen John Travolta disasterpiece called The Experts (he plays a guy so hip and cool, the KGB kidnaps him so they can learn how to be like the hippest and coolest of Americans). Both films assume the viewer will be so in awe of the big hair, bright colored clothes, and charm of the hero that plot holes will be forgiven. Maybe that’s what makes Tuff Turf so charming; it’s completely arrogant and half-assed and half the fun in watching it is realizing these guys thought they were doing something really cool; within a year it was probably completely dated stylistically.