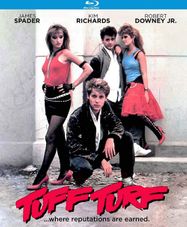 For Morgan Hiller (James Spader, Bad Influence), it’s tough enough being the new kid in school. But when he tangles with a local gang, he becomes the lone target of their vengeance. The situation turns from dangerous to deadly when he meets and falls for the gang leader’s sexy girlfriend (Kim Richards, Escape to Witch Mountain). Welcome to Tuff Turf–where enemies are made, reputations are earned, and love is the riskiest affair of all. Robert Downey Jr. (Iron Man), Matt Clark (White Lightning) and Art Evans (Die Hard 2: Die Harder) co-star in this powerful ’80s high school action-drama that features live performances by The Jim Carroll Band and Jack Mack & The Heart Attack, plus songs by Marianne Faithfull, Southside Johnny, Lene Lovich and more. Directed by Fritz Kiersch (Children of the Corn).