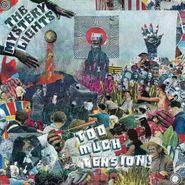 Limit One Per Customer

The Mystery Lights are a Salinas-by-way-of-NYC quintet whose name telegraphs the romantic allure of big city rock ‘n roll. Described as “betting against the odds to live the archetypical 20th century downtown musician lifestyle” by their Daptone Records bio, the band travelled from the small California farm town to live in what was once the grimy mecca of rock, at a time when many other bands have been priced out. Scraping by and soaking in what remains of that CBGB spirit, The Mystery Lights play garage rock that’s steeped in well-worn punk tradition. Sounding like a mix of '60s proto-punks such as The Seeds and The Litter with the angular moodiness of Television, Too Much Tension! is in love with the old world, and makes the modern one that much more bearable.