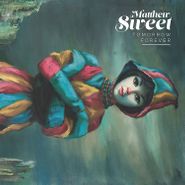 Sharing the name with a particularly unsettling Margaret Keane painting, Matthew Sweet’s distinctive brand of power pop is still just as wide eyed and potent as the stares of the doe-like waifs from those kitschy canvases. Culled from 38 songs recorded over the span of 3 years and whittled down to a final 17, Tomorrow Forever is Sweet’s first album since 2011, and originates with a 2014 Kickstarter campaign promising to bring songs with “strong clear delivery, energetic and heartfelt from rock to melancholy and back again.” What reads as a cover letter to join the songwriters guild translates into a record of sonic lushness; featuring a blend of muscular guitar work, wistful melodies, and pop savvy that hits all the sweet spots (sorry) with some strong ensemble playing courtesy of the cameo-laden backing band, which includes none other than Rod Argent of the Zombies providing keyboards. Guided By Voices, Big Star, and R.E.M. may be unaccounted for on that supporting cast list, but echoes of their sound can be felt here, distilled into a pure, Merseybeat worshipping brand of rock n roll and delivered with Sweet’s distinctive, yearning voice. The guy behind one of the best songs of the '90s proves that two decades later he is still full of life on a crowdfunded album of crowd pleasers.