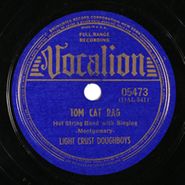 A wonderfully remastered Vocalion 78 of quintessential Western Swing by a later incarnation of the band that launched the careers of titans of the genre Bob Wills and Milton Brown.  On the A-side, sweet four part harmonies hover over the swingin' bounce of intertwining fiddles, electric guitar, tenor banjo, upright bass and piano.  The B-side instrumental ups the jazz quotient, starting with an extended lead by the fiddle player, who eventually gives way to the electric guitar (but no clarinet, despite the title).