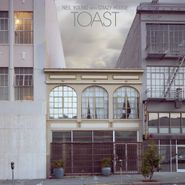 Originally recorded way back in 2001 at San Francisco’s Toast Studios, Neil Young & Crazy Horse’s Toast is finally makings its way to fans. Young shelved the album for just straight up being too sad; it chronicles the final waning days of a relationship. That may be true, but it’s also a work of unmistakable beauty and incredible song craft. “Standing in the Light of Love” is a prime example: Young’s plaintive vocals are propelled by an incisive, urgent, animal-like force, the guitar riffs are mournful and unforgiving, powered at times by punk and hardcore ferocity. It’s a really special album—possibly one of Neil Young and Crazy Horse’s best.