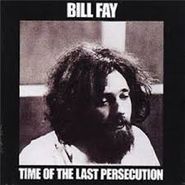 Singer/songwriter Bill Fay released two albums in the early 1970’s, both of which are fantastic. Time of The Last Persecution is the second release and deals with themes of spiritual soul searching. The vibe of the album is bittersweet, dark and haunting, with a distant sense of hope and light. The title track “Time of the Last Persecution” is a psychedelic biblical journey with fantastic noisy guitar played by Ray Russell, blended with Fay’s sweet and moody piano. “Pictures of Adolf Again” demonstrates Fay’s strong political leanings. Less heady songs include the superb “Some Good Advice,” a jazzy tune lyrically set in a party atmosphere. Bill Fay is a tragically unrecognized talent and Time of the Last Persecution is a highly recommended listen.