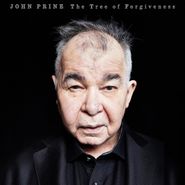 When John Prine reflects on life, he doesn't look into a polished mirror, but rather through the smoke of a burning cigarette and into the drink gleaming in his glass. His first album of original music in 13 years is full of silly, melancholy, and sincere vignettes and remembrances which play out with swan song-like sensibilities against hints of the confused times we live in today. "When I Get To Heaven" harkens back to Merle Travis' half-spoken, half-sung folk songs from the 1940s and builds with amusing, celebratory lyrics about all the great things coming to him in the afterlife. The country-funky "Egg & Daughter Nite, Lincoln Nebraska, 1967 (Crazy Bone)" is like a familiar tune, that never goes exactly where you think it will, full of clever word play affirming the virtues of being a lifelong nut, while the album's sentiment could be summed up in "The Lonesome Friends Of Science" with the line "the lonesome friends of science say/the world will end most any day/well if it does then that's OK/'cause I don't live here anyway."