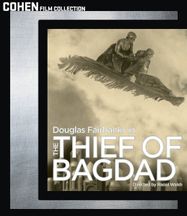 Newly restored from two 35mm negatives and incorporating the color tints and tones of the original release prints, this definitive edition of The Thief of Bagdad features silent film score maestro Carl Davis conducting the Philharmonic Orchestra, performing a magnificent score that intermingles Davis' own music with the iconic Orientalia of Rimsky-Korsakov.

The Thief of Bagdad is a dazzling Arabian Nights adventure fantasy set in the city of Bagdad and one of the most imaginative of all silent movies. The elaborate and lush backgrounds, the massive sets by William Cameron Menzies who would later design Gone With The Wind, all have an expressionist quality unique for American films of the time. Fairbanks is at his lightest and most impudent best as the dashing Ahmed, the thief who wins a princess.