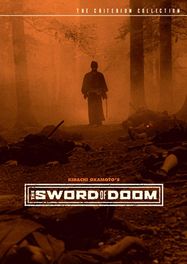 大菩薩峠 literally translates to “The pass of the great Buddha” which is a much more evocative and memorable name than the calculatedly generic “Sword of Doom.” Despite being one of my favorite films of all time, I usually get it wrong as it’s so vague and unmemorable. In my (and many others’) opinion, it’s the greatest example of the martial arts sub-genre of chanbara which are Japanese period films focused sword fighting.

The film is based on the serialized, newspaper-published stories written by Buddhist author Kaizan Nakazato beginning in 1913. Over three decades he wrote and published new segments until his death. Sword of Doom isn’t the first time the stories have been adapted for film, but it is the most highly regarded.

The film follows our hero, the sociopathic Ryunosuke Tsukue – a cold-hearted, master swordsman who seems to kill indiscriminately for pleasure, a reality quickly made clear by his ruthless attack on a Buddhist pilgrim. And yet, his motives aren’t completely clear since Ryunosuke wears an unfailingly expressionless stone face that never betrays enjoyment, perturbment or any other recognizable emotions. He reaches another low when he enters a non-lethal fencing competition and kills his opponent – this after he promised the fighter’s wife that he’d throw the fight in exchange for her virtue. As a result, people start getting it into their heads that something has to be done about this menace to society, and yet he easily kills all who try to stop him.

Ryunosuke, meanwhile, joins the Shinsengumi – a corrupt police unit better known for carrying out murders and assassinations than for keeping the peace. It’s a good fit for Ryunosuke because it allows him to satisfy his bloodlust by hacking up men, women and children with a degree of impunity. Soon after joining the force, he hears that one of his victims’ brothers is seeking to fight him. He also witnesses the skill of the righteous Shimada Toranosuke as he reluctantly dispatches with Ryunosuke’s comrades. For the first time he betrays emotion as, in awe, he watches someone who kills only in defense and yet with unparalled skill.

Shaken, Ryunosuke’s grasp on reality is also loosened. He continues in his depraved ways, committing more unspeakable acts before the film culminates on one of the most amazing and debated sequences in martial arts film history.

The look of the film is stunning. Bright snow falls against pitch black skies and blood sprays across pale, rice paper walls (while lopped off limbs tumble left and right). The neutrals are sharply contrasted, contributing to the moody, otherworldly atmosphere. A quiet intensity of sustained dread is punctuated by terrifyingly unpredictable explosions of senseless violence which adds to the feeling of unease which saturates the film. Characters stand in dramatic poses and are filmed and composed with an aesthetic that is more identifiably Japanese than some more famous Samurai movies popular in the West. The end result is so deft, so skilled, so simultaneously enthralling and unsettling that it’s a wonder that director Kihachi Okamoto remains as obscure as he does.