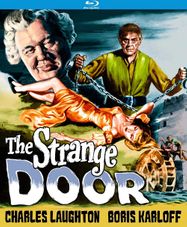 Screen legends Charles Laughton (Witness for the Prosecution) and Boris Karloff (Black Sabbath) haunt the dungeons of a medieval château in this horrific adaptation of the classic Robert Louis Stevenson (The Strange Case of Dr. Jekyll and Mr. Hyde) story. Laughton, the Sire de Maletroit, is an evil French nobleman, so obsessed with hatred of his own brother (Paul Cavanagh, A Bill of Divorcement) that he imprisons him in the castle dungeon.

The Sire also tries to destroy the life of his brother’s daughter (Sally Forrest, Not Wanted) by forcing her to marry a rogue (Richard Stapley, The Girl from Rio), but his plans are upset when they fall in love. Aided by Voltan (Karloff), an abused servant, the lovers attempt to escape, but the Sire imprisons them in a cell with closing walls that may spell violent deaths for the young lovers. Directed by Joseph Pevney (Female on the Beach).