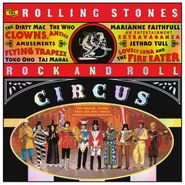 Rock And Roll Circus is one of those bits of pop music arcana that, much like Neil Young’s Homegrown or Prince’s Black Album, was pulled from market prematurely, leaving years of speculation and curiosity in its wake. In the case of Circus, it was nearly 30 of them. The entire kitschy 1968 concert, filmed in a makeshift big top stage and initially planned to be released on the BBC before the band balked last minute, was finally screened in 1996. While it’s certainly no Woodstock, the film contained a multitude of rock ‘n roll curiosities: among blistering sets by The Who and the headlining Rolling Stones there’s also a very early incarnation of Jethro Tull (featuring none other than Toni Iommi during his ultra-brief stint as guitarist), Brian Jones’ last ever appearance, and the one-off supergroup the Dirty Mac, featuring John Lennon, Yoko Ono, Keith Richards, and Eric Clapton playing raggedy blues rock.

For the first time since 2004, Rock And Roll Circus has been rereleased, both on Blu-ray and DVD, spruced up with a 4K Dolby Vision restoration. The soundtrack has also been remixed and expanded, from the original 19 tracks to 28. Relive those glory days of the rock ‘n roll era when something so wildly eccentric and star-studded could ever possibly be relegated as an afterthought.