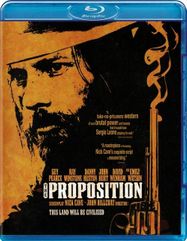 The Proposition is story of a lawman (Winstone) down under that gives a career killer (Pearce) the chance to save his little brother from the gallows if he can find his older brother (Huston) and execute him.

Written by musician Nick Cave of Bad Seeds fame, the script is brutal, authentic and filled with fantastic period dialogue. Every character is brilliantly realized - no true heroes or absolute villains - just multi-dimensional people wrapped up in a tragic place. Cave and Warren Ellis provide the film’s score with is a glorious mixture between primal sounds of the native culture, mixed with contemporary instruments.

John Hillcoat’s direction never shies away from showing the harsh and bloody violence of the Australian frontier when settlers battle with the aborigines, to the point of genocide.

Chris Kennedy’s production design is extremely gritty, giving the film an aesthetic that feels true to life - full of dirt, flies and sweat.

Guy Pearce (L.A. Confidential) is great as “Charlie Burns” - a stoic man of few words pulled in opposing directions once given the proposition of ending one brother’s life to spare the other's.

Ray Winstone (Sexy Beast) is a dynamically conflicted character named “Captain Stanley.” He is a man who promises to “civilize this land,” but deep down may not have the stomach to do what it takes. He tries to carry this burden, hiding his bride (Watson) from the unforgiving realities of this time and place in the world.

Emily Watson (Punch-Drunk Love) plays Stanley’s dotting wife - a sophisticated woman in a highly unsophisticated frontier, who is much stronger than her husband could possibly imagine.

David Wenham (Lord of the Rings: Return of the King) is deliciously sleazy as a three-piece suit-wearing bureaucrat who thinks he the god of righteousness in this small community.

Danny Huston (30 Days of Night) plays “Arthur Burns” - a poetry-spouting badass fugitive hiding in the mountains with his gang of criminals. He is both eerily intimidating and intellectually charming.

John Hurt (Alien) has a small but colorful role as a drunken Irish bounty hunter looking to claim the rewards that come with the heads of the guilty.

All and all, The Proposition is the finest Western to be made since Clint Eastwood’s Oscar-winning Unforgiven.

The Proposition is a visually stunning tale of loyalty, betrayal and retribution set on the frontier.

In the harsh, unforgiving landscape of the Outback, Charlie Burns is presented with an impossible proposition by local law enforcer Captain Stanley; the only way to save his younger brother Mikey from the gallows is to track down and kill Arthur, his psychotic older brother. Meanwhile, Captain Stanley has other problems to contend with. Having given up their comfortable life, he is desperate to shield his innocent wife Martha from the brutalities of their new surroundings. He also faces mounting pressure from renegade natives and his superior Eden Fletcher to bring order to the region.

An uneasy sense of foreboding grows as events close in and each character faces a punishing moral dilemma that leads to a murderous climax.