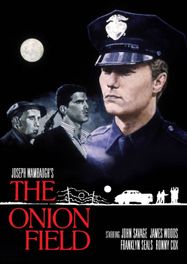 From a real life American tragedy, this tale of thoughtless brutality, cold-blooded murder and hard won justice is a prowling, gripping, disturbing movie starring John Savage (The Deer Hunter) and James Woods (Cop) and featuring a stunning attention to detail. The Onion Field is intriguing, absorbing, powerful, well acted and riveting from beginning to end. On March 9, 1963, LAPD officers Karl Hettinger (Savage) and Ian Campbell (Ted Danson, TVs Cheers) pull over a vehicle for making an illegal U-turn and find themselves held at gunpoint by two seasoned armed robbers. Forced to give up their guns and drive to a deserted road, both officers face the horror of becoming victims in a mob-style execution... but only one is able to escape into the bleak darkness of an onion field. Stylishly directed by Harold Becker (Malice) with a screenplay Joseph Wambaugh (The New Centurions) - based on his best-selling novel. Co-starring Franklyn Seales, Ronny Cox and Christopher Lloyd.