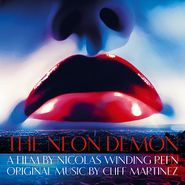 For the soundtrack to L.A. fashion thriller, The Neon Demon, director Nicolas Winding Refn (Drive, Only God Forgives) once again teamed up with composer Cliff Martinez. A master of tension-filled minimal electro, Martinez provides track after track filled with cool, slick dread for The Neon Demon. Much like his score for Drive, Martinez manages to simultaneously channel both that magnetic siren-song glamour and the neon-tinged seamy underbelly of Los Angeles, particularly on the film’s theme, “Neon Demon.” Julian Winding’s dark, driving “Demon Dance” and the electro-industrial dance tune “Mine” by Sweet Tempest are well matched to the mood painted by Martinez. The album ends with Sia’s heavily processed R&B of “Waving Goodbye,” which doesn’t fit the overall dark disco sound of the album, but it is perhaps well-placed for a film about fashion – what’s hot now is what matters.