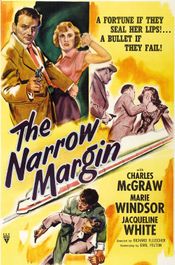 One of the very best hard-boiled thrillers ever to come out of Hollywood, The Narrow Margin stars Charles McGraw as Detective Walter Brown, a cop with a simple mission – get mobster's wife Frankie Neale (Marie Windsor) on the train and take her to the grand jury in Los Angeles, where she is going to testify against her late husband's colleagues. But the mob don't want her to spill the beans and they'll stop at nothing to stop her taking the stand; Brown realizes they've planted assassins on the train with them and it's up to him to keep her safe.