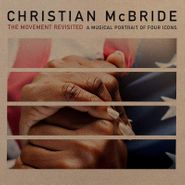 McBride’s stunning masterpiece about “the struggle” is now a 20 year-long continuously evolving project that combines elements of jazz, gospel, big band, swing, symphony, theater and dramatic spoken word in a clear-eyed, yet optimistic, look at where our society has come from and where it is hopefully headed.

In 1998, a musical commission from the Portland (Maine) Arts Society set in motion what would eventually become a major part of his life’s work. Written for just a quartet and gospel choir, that original version of The Movement Revisited gave only a hint of what the piece would eventually become. In 2008, the L.A. Philharmonic asked if he would like to recreate it on a larger scale for their upcoming season. The Movement Revisited grew into a sweeping four-part suite for big jazz band, small jazz group, gospel choir, and four narrators who convey the pain and pathos, euphoria, joy, and ultimately hope of the struggle through the words and writings of four iconic Americans: the Rev. Dr. Martin Luther King Jr., Rosa Parks, Malcolm X, and Muhammad Ali.