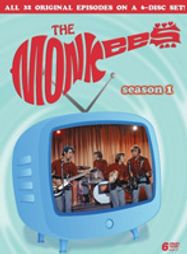 The episodes that make up the first season of The Monkees sees Davy Jones, Mike Nesmith, Peter Tork & Micky Dolenz getting into all sorts of crazy situations, all in the hope of landing the gig. The first season of The Monkees features an outstanding soundtrack of material, with songs such as "(I'm Not Your) Steppin' Stone", "Last Train to Clarksville", "I'm A Believer", "Mary, Mary" & " Valleri" being featured throughout the entire season.