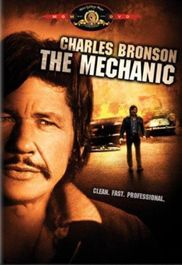 Charles Bronson "delivers in this action drenched" (Variety) gangster thriller that delves into the dangerous minds of the underworld's most elite killers. "Visually alive (Cue) and "totally engrossing" (The Hollywood Reporter), The Mechanic is a movie you won't want to miss!

Arthur Bishop (Bronson) is a mob hit man who operates in a world of his own... an uncompromising world where conventional rules of morality don't apply and where one wrong move could cost him his life! He's always worked alone, but as age catches up with him, Bishop takes on a competent and ruthless apprentice (Jan-Michael Vincent) and teaches him everything he knows. Together they become an unmatchable team of globetrotting killers... until the pupil's ruthlessness puts him on a collision course with his teacher!