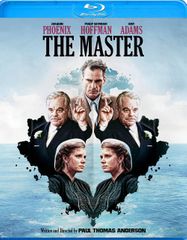 Haunted by his past, WWII veteran and drifter Freddie Quell crosses paths with a mysterious movement called The Cause, led by Lancaster Dodd aka The Master and his wife Peggy. Their twisted relationship is the core of this film that is "a glorious and haunting symphony of color, emotion and sound with camera movements that elicit an involuntary gasp and feats of acting that defy comprehension" (A.O. Scott, The New York Times). Awarded Best Actor for both Philip Seymour Hoffman and Joaquin Phoenix and Best Director for Paul Thomas Anderson at the 2012 Venice Film Festival, "The Master is a film which casts a spell like a fever dream" (David Ansen, Newsweek). Stunningly photographed in 65mm, The Master stands as an undeniable cinematic experience. Will Freddie be able to outrun his past? Will The Cause help or hurt him? Can this tortured, violent creature be civilized? Or is man, after all, just a dirty animal?