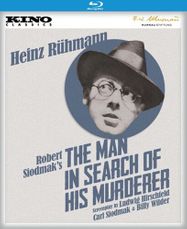 Seeing no point in going on but lacking the nerve for suicide, put-upon Hans Herfort (Heinz Rühmann) hired a thug to do away with him when he least expected it. Not long after, however, love entered his life-and now, he's unable to find his imminent assassin to tear up the contract! Early and darkly farcical take on an oft-filmed scenario from director Robert Siodmak co-stars Lien Deyers, Raimund Janitschek, Hans Leibelt; co-scripted by Billy Wilder and Curt Siodmak. AKA: "Der Mann, der seinen Mörder sucht," "Looking for His Murderer."53 min. Standard; Soundtrack: German; Subtitles: English; audio commentary. In German with English subtitles.