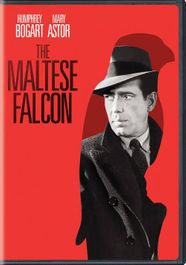 Like John Ford & John Wayne or Scorsese & De Niro, John Huston & Humphrey Bogart's work together as director and star will be forever linked in audiences' subconscious. After years of being a happening screenwriter, Huston got his chance to direct his own adaptation of Dashiell Hammett's crime novel, The Maltese Falcon. The film would help make Bogart a leading man, would lead to a 50-year career for Huston, and set the standard for detective films to come.

Like many detective and crime films of the 1940s, The Maltese Falcon is often improperly lumped in with the Film Noir genre. At best, The Maltese Falcon could be deemed a kick-starter to the genre that actually peaked in the post-WWII years. With the exception of a femme fatale or a detective it has little in common stylistically with the best of Film Noir (The Postman Always Rings Twice, Out Of The Past, etc.). That's not to say that the film (and the book) were not hugely influential, they were.

San Francisco private eye Sam Spade (Bogart) and his partner are hired to trail a guy by a rich babe, Brigid O'Shaughnessy (Mary Astor, though we are told over and over how attractive she is, I don't see it). Both the man being trailed and Sam's partner are shot. Sam becomes a suspect. But he gets in deeper with the woman and her problems as she's involved with some shady types, all after a valuable bird statue (or a Maltese falcon), including a Euro-creep, Joel Cairo (Peter Lorre, this the first of a number of films with Bogart after years of playing Mr. Moto); Wilmer, a hired gunman (Elisha Cook Jr.); and Wilmer's boss, "the fat man" (Sydney Greenstreet), all the while having to dodge the questions of snooping police officers, hoping to take Spade down.

Like another iconic detective role Bogart would take on, The Big Sleep’s Philip Marlowe, the who, what, when, and where of the story doesn't always make perfect sense. But who cares? The fun is in watching Bogart out talk and out cool his foes and the cops. The ever-confident Bogart persona is pure confidence. But unlike a modern action star, he is no superhero. He can be vulnerable and makes mistakes as he tries to juggle all the angles he's playing. For over a decade Bogart had been playing mostly B-movie villains, but coming off of the gritty High Sierra and They Drive By Night and with The Maltese Falcon, he was in the midst of transitioning into a leading man. The following year he would play Rick in Casablanca, and the new Bogart was fully born - a romantic lead with an overbite and lisp, a little rough around the edges, but completely in control, matter of fact, so heroic, he'll pass on romance if it's the moral thing to do (as both The Maltese Falcon and Casablanca prove). After a number of memorable flicks, ten years later working with Huston again, Bogart would win an Oscar for The African Queen. And then, in 1957, unfortunately he would die of throat cancer at the age of 57.

Famous hellraiser director John Huston was the son of character actor Walter Huston (whom John would direct to an Oscar in one of his best films, The Treasure Of The Sierra Madre). Huston had a distinguished career, though below the "brand-name" status of his peers like Billy Wilder, Howard Hawks, and Alfred Hitchcock. Besides his Bogart films, he would shine in a number of different genres as varied as caper flicks (The Asphalt Jungle), pseudo-westerns (The Misfits), offbeat dramas (The Roots Of Heaven - a lost gem still not on DVD or VHS in the U.S.), and black comedies (Beat the Devil). After a couple of hit-or-miss decades, peaking with Fat City in '72 and then bottoming out with the horror flick called Phobia (starring... what the? Paul Michael Glaser of Starsky and Hutch), Huston would become a busy actor for hire (even scoring an Oscar nomination for his supporting turn in The Cardinal). But after the bloated musical Annie, the 80-something director would have a major comeback in the '80s directing a couple of dynamo-acting showcases, Under The Volcano and Prizzi's Honor.

Though an unmemorable version of Hammett's novel was made a decade earlier, the impact of this version of The Maltese Falcon would be felt in detective films for decades. The prototypes of the shady lady and the anti-hero private eye, as a forerunner to the film-noir genre, would be used over and over (if he wasn't a cynical private eye, he may be some other form of cynic, like a cynical insurance adjuster [Double Indemnity]). For decades the Sam Spade fingerprints can be found on films ranging from Brick, Who Framed Roger Rabbit?, Blade Runner and a pointless sorta-sequel called The Black Bird with George Segal sadly trying to fit into Bogart's suspenders. Maybe the greatest tribute to The Maltese Falcon (and The Big Sleep as well) was the 1974 Noir-loving masterpiece, Chinatown. Director Roman Polanski and screenwriter Robert Towne wore their love for the two Bogart flicks on the page, taking what in '41 were fresh characters and plot devices and spinning them on their heads. But The Maltese Falcon is more than just film history homework; besides being perfect introductions to the genre and Bogart, it's a devilishly smart little mystery.

A gallery of high-living lowlifes will stop at nothing to get their sweaty hands on a jewel-encrusted falcon. Detective Sam Spade (Humphrey Bogart) wants to find out why - and who'll take the fall for his partner's murder. An all-star cast (including Sydney Greenstreet, Mary Astor, Peter Lorre and Elisha Cook Jr.) joins Bogart in this crackling mystery masterwork written for the screen (from Dashiell Hammett's novel) and directed by John Huston. This nominee for 3 Academy Awards - Best Picture, Supporting Actor (Greenstreet) and Screenplay (Huston) - catapulted Bogart to stardom and launched Huston's directorial career.