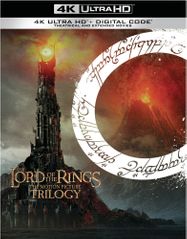 With the help of a courageous fellowship of friends and allies, Frodo Baggins embarks on a perilous mission to destroy the legendary One Ring. Hunting Frodo are servants of the Dark Lord, Sauron, the Ring's evil creator. If Sauron reclaims the Ring, Middle-Earth is doomed.

Frodo Baggins and the Fellowship continue their quest to destroy the One Ring and stand against the evil of the dark lord Sauron. The Fellowship has divided; they now find themselves taking different paths to defeating Sauron and his allies. Their destinies now lie at two towers — Orthanc Tower in Isengard, where the corrupted wizard Saruman waits, and Sauron's fortress at Barad-dur, deep within the dark lands of Mordor. Based on the novel The Two Towers, the second in The Lord of the Rings trilogy by J.R.R. Tolkien.

The final battle for Middle-earth begins. Frodo and Sam, led by Gollum, continue their dangerous mission toward the fires of Mount Doom in order to destroy the One Ring. Aragorn struggles to fulfill his legacy as he leads his outnumbered followers against the growing power of the Dark Lord Sauron, so that the Ring-bearer may complete his quest.