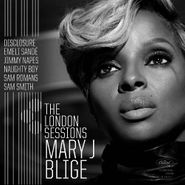 Only Mary J. Blige could make therapy sound sexy, as she does on the opening track to her 13th studio album. “Why would I spend the rest of my days unhappy? When I can go therapy two times a day” she sings over a jazzy groove and doo-wop backups on the Sam Smith-penned “Therapy.” Indeed, The London Sessions sounds culled from intense soul-searching, given its lyrical content and searing delivery, but Blige’s ability to share herself so intimately feels like a gift, rather than indulgent. Smith proves one of Blige’s strongest collaborators on London Sessions, giving her a meaty, melodic ballad with “Not Loving You,” and Blige’s take is among her most beautifully rendered. And Disclosure provides Blige with her most dancefloor-ready backing track since “Family Affair” on the hard-hitting “Right Now,” over which Blige does what she does so well, giving voice to those oppressed in relationships and offering a stirring ode to self-respect. Blige’s consistent voice floats evenly through future-leaning tracks like “Right Now” or the club-ready, Rodney Jerkins-produced “My Loving” along with the kind of ballads on which she made her name, giving London Sessions a nice cohesion, despite its disparate styles. It’s an elegant album, one that doesn’t strive to sound younger or harder than it is (even if young collaborators like Smith and Disclosure lend hipness to the project) but that doesn’t succumb to dull adult-contemporary tropes. Rather, on tracks like the powerful “Long Hard Look,” she sits alongside those she’s influenced (Jessie Ware, Alicia Keys) as a modern soul artist who stays true to herself while remaining engaging and pop-oriented, with an eye to the horizon—both musically and personally.