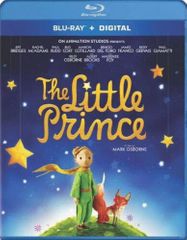 A young girl (voiced by Mackenzie Foy) being pushed into prep school by her determined mother (Rachel MacAdams) befriends their elderly new neighbor (Jeff Bridges). He regales her with fantastic tales of his aviator days, and his desert encounter with a young prince (Riley Osborne) from another world... and let's her reconnect with childhood. Stop-motion/CGI rendering of the Antoine de Saint-Exupéry tale also features the voices of James Franco, Marion Cotillard, Paul Rudd. 108 min. Widescreen; Soundtrack: English.