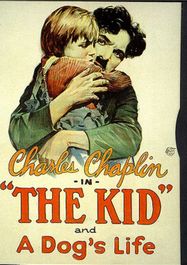 The Kid was director Charlie Chaplin's first full-length film and is considered one of his best. It co-stars five year-old Jackie Coogan, whom Chaplin discovered performing with his father on a Los Angeles vaudeville stage. He was a natural for the screen and captivated movie audiences as quickly as he had Chaplin.

The story is about a child abandoned by his unwed mother (Edna Purviance), who hopes to offer him a better life by leaving him in a limousine. Unfortunately, the limo is stolen and the burglars dump the baby into an alley, where he is discovered by The Little Tramp.

After trying unsuccessfully to give him to a variety of more suitable parents, The Little Tramp is at last obliged to keep him. He teaches The Kid Everything he knows, from lessons of the street to polite table manners, and fights fiercely to keep him through one Chaplinesque misadventure after another. At the bittersweet end, The Little Tramp is welcomed into the home of the Kid's mother, who has recently learned the child's identity and taken him home with her. Also Includes A Dog's Life