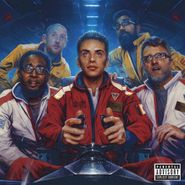 Logic’s sophomore album proves the young Maryland rapper has more than what it takes to thrive beyond his substantial hype. Logic, who’s kind of like a young Eminem with exuberance in place of pathos, came up in tough circumstances, growing up in housing projects with addiction around him, which helped fuel his rise into a rapper to watch. Following four mixtapes and opening slots for the likes of Method Man, Redman and Ludacris, Logic released his debut record, Under Pressure, in 2014 to rave reviews. The Incredible True Story proves he’s more than a flavor of the moment. Tracks such as “Like Whoa” show Logic can really rap, pouring words out at a breakneck pace, but he’s also incredibly precise. He raps with the grace of a figure skater, and the vintage soul and soundtrack samples employed by producer 6ix and Logic only add to the overall smoothness on tracks like “Young Jesus (feat. Big Lenbo),” in which Logic’s line about “spittin’ like a baretta” is all too appropriate. Though Logic already has amassed a dedicated following, The Incredible True Story is the album that should push him to the upper echelon of hip hop.