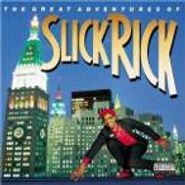 Lately Slick Rick The Ruler has been performing his landmark 1988 album, The Great Adventures of Slick Rick, in full to highly appreciative audiences. No wonder since The Great Adventures, which has been exhaustively sampled and referenced in hip-hop throughout the 26 years since its release, is both a flawless and highly influential hip-hop album. Slick Rick is unlike any other emcee in both style and flow. He is a wildly imaginative and witty storyteller who delivers tales with sometimes totally opposite viewpoints in his and his alter ego MC Ricky D's signature half-British accent and snappy musical flow. Recently reissued on vinyl, the album includes such classics as the ever engaging "Children's Story," "The Ruler's Back," and "Mona Lisa," the real raunchy "Treat Her Like a Prostitute," and the X-rated "Indian Girl (Adult Story)." Great Advertures fans include Nas who called it his favorite album of all time.