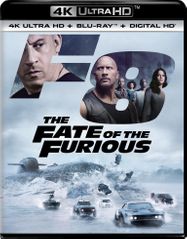 The latest exhilarating installment of the nitro-fueled blockbuster action franchise features a gripping new storyline, the most outrageous collection of vehicles yet, and an all-star cast of fan favorites and series newcomers. From the shores of Cuba and the streets of New York City to the icy plains off the arctic Barents Sea, the close-knit crew criss-crosses the globe to stop an anarchist from unleashing world chaos — and to bring home the man who made them a family. With more than an hour of never-before-seen bonus features and an EXTENDED DIRECTOR'S CUT, The Fate of the Furious will be the crowning glory of every fan's collection.