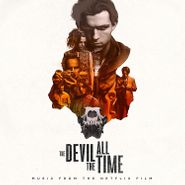 The Netflix thriller, The Devil All The Time, owes a lot of its Southern gothic atmosphere to its soundtrack of folk, country and dreamy '50s pop. Two tracks by Pokey LaFarge, including "Washed In The Blood" which he performs in the film, and compositions by Saunder Jurriaans & Danny Bensi are complemented by well-curated classics from artists like Jimmie Rodgers, Wynn Stewart, Sonny James, and Bill Phillips with Dolly Parton ("Put It Off Until Tomorrow"). The many highlights include Ferlin Husky's "Wings of a Dove" and The Delmore Brothers' "Hillbilly Boogie."