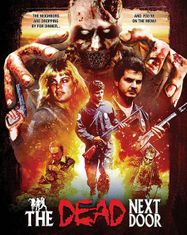 Two and a half decades before The Walking Dead made zombies mainstream on cable television, 19-year-old writer/director J.R. Bookwalter (Ozone, Witchouse 2: Blood Coven) embarked on The Dead Next Door, an ambitious horror feature pitting an elite team of Zombie Squad soldiers against hoards of the undead and the secretive religious cult hell-bent on protecting them. The film would ultimately take four years to complete with the help of a now-famous Hollywood director and more than 1,500 Northeast Ohio residents, who portrayed the multitudes of bloodthirsty ghouls.

For this collector's edition, brand-new 4:3 and 16:9 1080p HD masters have been painstakingly created from a 2K restoration using the original Super-8mm film elements. Also included is a 5.1 surround mix which restores the voices of the original cast members for the first time ever, vintage and newly-prepared bonus materials, audio commentaries, and several all-new extras not previously available.