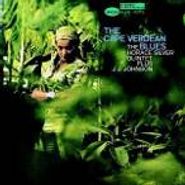 By the mid-60s, it was practically de rigueur in jazz for composers to turn to Latin American or Caribbean influences for at least one record. Horace Silver didn’t stop with just sambas and calypso beats, however, saluting his father’s native Cape Verdean Islands off the west coast of Africa with these five compelling cuts (and Joe Henderson’s “Mo’ Joe”). The music here is slightly more advanced than previous Silver offerings, largely due to tenor man Henderson (a holdover from Silver’s first cross-over hit, 1964’s Songs for My Father) and new trumpeter Woody Shaw; the addition of trombone legend J.J. Johnson on half the tracks here adds another dimension. The title track-opener has a syncopated calypso beat that the three-horn front-line drives home before the pianist’s call-and-response, block chords/right hand-runs solo. Henderson’s up next, and like the rest of his solos here, his aggressive attack (which is even more near-“out” on the slinky blues “Bonita”) is a real change-up from Silver’s previous tenor man, Junior Cook. Shaw, too, pushes Silver’s compositions out of their comfort zone. His soaring solo in “The African Queen” ignites this moody masterpiece, bassist Bob Cranshaw’s five-note figure providing the anchor while drummer Roger Humphries unleashes polyrhythmic fills all around it. Still, this is a Horace Silver record, and swing is still king. “Pretty Eyes” is probably the most Horace Silver-like track on here, but it’s actually the first waltz he’d ever written (which tells you about the man’s sense of swing). The double-time hustle of “Nutville” features Johnson’s finest moments on the record and scorching solos from Shaw and Henderson; it’s an old-fashioned cooker of the kind Silver always excelled at. Even though this particular line-up didn’t last very long, it’s nice to hear Silver being challenged and rising to it with his usual aplomb -- and always with his swing intact.