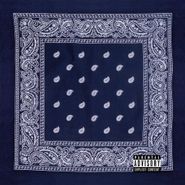 After a brief appearance online, The Blueprint, the latest mixtape from L.A.-based rapper Johnson Barnes III, better known as Blu, is given an official release. For this particular outing Blu has chosen to collaborate with hip hop producer Shafiq Husayn, one third of the production team Sa-Ra Creative Partners, who has previously worked with artists such as Erykah Badu, Thundercat, Ty Dolla $ign, and Kanye West. Decked out in gang culture down to the cover art, the final product serves Blu's smooth delivery well as he delivers an aural love letter to the city they both he and Husayn call home.