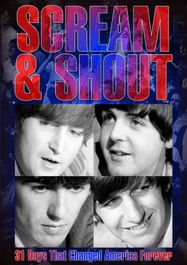 Six months after their triumphant first U.S. visit in February, 1964 which included their live American television debut on The Ed Sullivan Show The Beatles returned to the States for their first full-fledged North American tour. Starting on August 19, 1964 in San Francisco, they traverled the country playing to a half-million fans, breaking attendance records and causing mass hysteria wherever they appeared. By the time the tour ended in New York City on September 20th, they'd performed 32 shows at 25 venues in 24 cities - all in just 31 days.